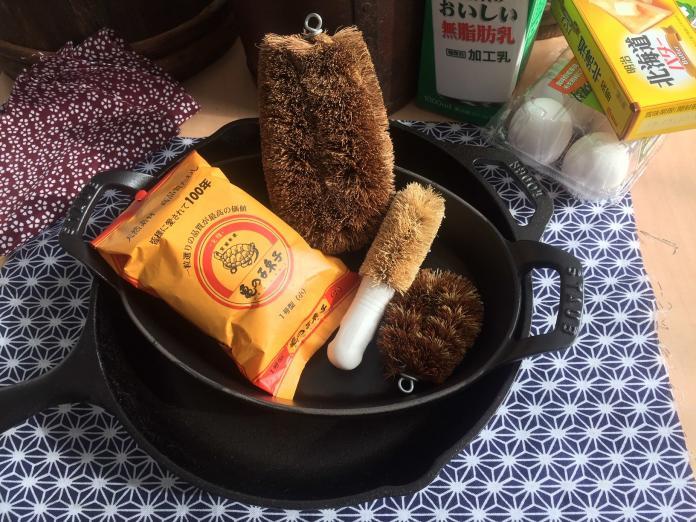 A Tawashi is a traditional scrubbing brush used in Japan. The brush is made from natural plant fiber, that’s also a great size that fits into your palm. From cleaning wooden chopping boards, stainless steel pots and pans to wiping down the kitchen bench. This little scrubber can do it all, including washing your cast-iron cookware without lifting the seasoning.

Another use of the Tawashi is to scrub vegetables such as potatoes, carrots and gobo (burdock) which apparently the little Japanese brush does very well. However, when I heard it is traditionally used to clean cast iron it really my sparked up my interest. I went down to the local home centre and picked up a few to try out.

My first thoughts the bristles would too hard and I wondered if it would do more harm than good.

So, how did the Japanese scrubber fair on my cast iron?

In this article, you can learn about the Tawashi scrubbing brush and also see it tested on cast iron cookware.

History of the Tawashi

The history of early Tawashi dates back hundreds of years. Although they were a little different back then. Japanese, used rice straw to make early versions of the brush. In the 20th century Tawashi brushes, used alternative plant fibers such as the fiber from the windmill palm and the coconut tree. Importantly this fiber absorbed little water making it perfect for kitchen use.

In 1907 a young businessman called Nishio Shouzaemon invented what is now the most famous Tawashi called Kamenoko Tawashi. Like many inventions, it was a bit of an accident. Nishio tried his hand at making doormats made from coconut fiber. However his mats were not robust, the bristles flattened after a few uses making them useless to wipe away dirt.

One day his wife used the material of one of these mats then used it as a scrubber. It seemed to work well and Nishio discovered that bending the fiber made stronger and water softened the bristles so it was suitable most surfaces without scratching. He was able cleverly attached the fiber to a wire so it could be shaped and wouldn’t come apart easily. Most likely learning from his previous attempt at making doormats and so Kamenoko Tawashi was born.

The Kamenoko Tawashi is the most recognized brand of Japanese scrubber. It comes in an orange packaging with a cute little turtle on the front.

The name is itself is quite interesting

In Japan, the Tawashi is so ingrained into the culture that sponges that were made of different material were still called Tawashi. Here are some examples.

Cleaning a cast iron skillet and an enameled dish using a Tawashi.

Aim: To see if how well the Japanese scrubbing would clean two types of cast iron cookware, bare and enameled cast iron.

The scrubber performed really well. Much better than what I thought. I also cooked some fried eggs after to see if there were any black spots of seasoning on the eggs. There wasn’t so the brush did a fine job cleaning my pans.

Would I use it? Yes, I would to my surprise. For a bit of fun, I thought I was going to write a bad review however it exceeded my expectations 10 fold. However, like a stainless steel scrubber food particles can get into the bristles so I would try to get as much food out as possible before cleaning.

Benefits of a Tawashi

Disadvantages of a Tawashi

Where can I buy a Tawashi

Okay, I brought mine in Japan where it’s a bit cheaper. However, check you Asian supermarket they often stock them. Amazon stock a couple of brands and you can check the prices. There’s Black Lion Tawashi (affiliate link) which seems a bit cheaper but I haven’t used them. I used the Kame no Tawashi (affiliate link) which is the famous one and well respected in Japan. Apparently, they last a long time and also the bristles are less likely to fall out. However, they are pricier.

I hope you enjoyed the article. I’ll try put some more articles on cleaning your cast iron over the coming months however for the meantime please feel free to explore the site.

Is cast iron safe? Here’s what you need to know.