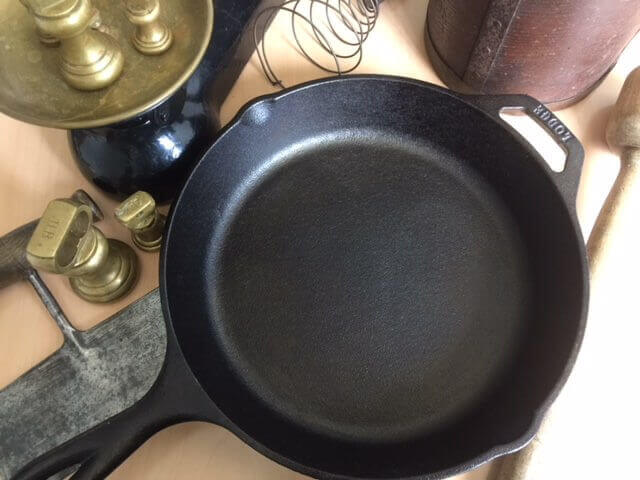 What are the benefits of cooking with cast iron cookware? Let’s find out.

Are you thinking about replacing your old non-stick pan? Why not consider cast iron cookware. I think they are great kitchen all rounders because the same pot can be used on the stovetop or in the oven. But if you’re new to cast iron you may want to know the benefits of cast iron cooking.

But if you want to check out my favorite skillets for new and experienced cooks just click the link.

Table: what are the benefits of cooking with cast iron?

The above mentioned benefits are a result of the material used, in cast iron. Basically cast iron is simply that, iron poured into a mold. Because of this the cookware is strong and easy to manufacture.

Cast-iron is also a proven cooking surface and probably most our forefathers used iron cookware. You’ll also find many old antique cast iron from the 19th still in usable condition. More on this later.

Here’s an unusual benefit, cast-iron cookware will bring out your inner hippy

Vintage cast iron is considered better than newer pieces because the manufacture was slightly different. And a major benefit is older cookware has a smoother cooking surface to what is mostly available today.

So if you have inherited cast iron from your parents or grandparents, make sure that you hold onto them. If by any chance you happen to come across antique cast-iron at a garage sale have a quick check of the maker. Some of the older American pans are amazing quality and are true collectors items. But take care there’s lots of pans out, there’s no need to rush.

Bare or pre-seasoned is usually a lot cheaper than enameled cast iron and some the vintage pieces. You can also pick up new cast iron cookware pretty much at any home center and department store.

However, I wouldn’t go too cheap, I’ve seen unseasoned pans for sale and they have a really rough cooking surface. If you are looking for a trusted brand at a lower price point then consider a Lodge.

I kinda have a soft spot Lodge. They make pre-seasoned cast iron cookware and they’re great quality. I really don’t think you can go wrong with them.

What are the benefits of cooking with cast iron cookware? Lets have a look at the most used piece of equipment in the kitchen. The cast iron skillet

It is really hard to find anything more useful in the kitchen. Lets take a look at what you can you do with your cast-iron frying pan? Pretty much anything you want, these include:

You already know how useful they are but if you get into cooking you may want to try cooking these in your skillet:

I’m first to admit I’m not a professional chef, however, a skillet it a great piece of equipment to have in your kitchen. Better still, you don’t need to be a professional chef either, cast iron cookware is easy to use and you can do so much with them. It’s little wonder why so many people love their cast-iron skillets.

Another benefit of cast iron is the material has huge thermal density. People often confuse this with thermal conductivity. With thermal density the cast iron remains hotter for longer. Perfect for Mac and Cheese that would otherwise go cold on the table after five minutes.

Some more benefits of using a cast iron skillet

They are potentially safer to use than most modern cookware

Cast iron has been around for a long time, we are talking more than 2,000 years. Historians suggest that people have been using cast iron as early back as the 3rd Century in China. Since then people from all over the world still use cast iron as their cookware of choice. Here’s a nice little article on the evolution of cookware.

Cast-iron is sturdy and extremely durable

Cast iron pans are heavy, but the cookware material is extremly durable. Although cast-iron pots and pans tend to rust when they are not well cared for. It should last many years if properly cared for.

Additionally, most cast iron, the high-quality ones at least, are cast in one piece. Because of this the cookware is unlikely to be damaged easily.

If you are health conscious or adopting a healthier lifestyle, you may want to consider cooking with a cast iron skillet or Dutch Oven.

If you want to know “why use a cast iron skillet?” there’s so many reasons for one, cast iron naturally allows you to cut down on your oil use. This is because it is more non-stick and releases food better than stainless steel.

When using cast iron, all you have to do is preheat your pan and add a small amount of oil. A small thin layer of oil on the surface is all that you may need. Stainless steel often holds into food more so more oil is required to avoid hard scrubbing later.

This of course cancels out if you’re deep frying. Remember I’m not a medical practitioner we just love our cast iron. Please contact a nutritionist or medical doctor for trained advice on healthy cooking and nutrition.

Another benefit of cast iron cookware is that it’s more non-stick than stainless steel and enamel cast-iron.

Well-seasoned cast iron has a natural non-stick surface. Unlike other non-stick cookware, cast iron pots and pans are not coated with synthetic components. However, pre-seasoned cookware is no where near non-stick as Teflon. But cast iron cookware from my experience is a lot easier to clean and releases food better than stainless steel. If your’e new to cast iron cook then here’s an article you may find interesting “Why cook with cast iron?”

The seasoning on the cooking surface gives your pots and pans the non-stick surface. Well, at least more non-stick than stainless steel.

You can easily season a piece of cast-iron cookware. It sounds difficult but it really isn’t. They’re some great videos on the internet on how to season cast-iron. Some are quite funny but there’s many great videos out there.

If you buy vintage cast iron I recommend putting on a new seasoning. You never know what has been cooked in your cookware perviously. So I think it’s best to take off the old seasoning back to bare metal. Then put a nice new layer of seasoning onto your vintage cast-iron.

If you do not want to season cast iron cookware yourself, you can buy a pre-seasoned cast iron skillet or Dutch Oven from reliable brands like Lodge. Lodge have the benefit of putting on a seasoning at a much higher temperature than we can using home ovens.

They can withstand high heat

Cast-iron’s ability to withstand high heat is one of the primary reasons why cast iron cookware is the best to use for all types of cooking. Another benefit of cast iron is that the material can withstand high heat and the cookware can be used outside on open flame. You can even put hot coals on a Dutch Oven without any fear of damage.

The capacity to withstand high temperature also means that cast iron skillets can be used for searing, sautéing veggies, as well as for deep and shallow frying. The high heat leaves a crispy layer on the outside without making the food mushy or dry in the center.

People are usually advised to preheat cast iron cookware before cooking. If you were to start cooking with your cast iron immediately without pre-heating the pan, there’s a high chance you will burn your food the center. The conductivity of cast iron is poor compared to other materials such as copper or aluminum and will take time for heat to transfer thoughtout the pan.

Even stainless steal is a poor conductor that’s why aluminum often sandwiched between two or three layers of steel. These pans come at a much higher cost than regular stainless pots and pans. Cast iron cooks evenly however, it needs preheating first.

You can avoid hot spots and cook your food evenly, if you pre-heat your cast-iron cookware on a lower temperature before cooking.

It’s slower to bring to temperature, however, cast iron has amazing thermal density. It is a key benefit of cooking in cast iron cookware. Thermal density is also what helps to ensure that your food cooks evenly and remains hot.

Unlike other cookware that has been constructed with other materials such as stainless steel, heated cast iron allows food to cook evenly throughout. With thin pans, food is just a few millimeters from the heat source and meals can burn quickly.

Cast iron more foregiving than other cookware. This is why chicken that has been cooked in a cast iron is usually cooked evenly and often more tender.

Cast iron can survive years of continued use without cracking or rusting. Just remember to keep a layer of seasoning on your cookware and avoid the dishwasher at all costs. Some of these old vintage pots and pans have been found in barns and under houses and after a bit TLC many of fine old timers are ready to cook with again. They really are made to last.

A great benefit of cast iron cookware is you are not restricted to a couple of leading brands.

There is a wide range to choose from. I would still go with a company you’re familiar with. My advice would be to make sure the cookware is seasoned. Without seasoning, the cookware could be rough to handle. Seasoning also gives a protective layer to the cookware and will prevent rust.

I’ve seen some great Dutch ovens sold by camping brands that look top-notch. Of course one of my favorite is Lodge. We have Lodge products and they are simply fantastic and offer great value.

What are the benefits to cooking with cast iron cookware? 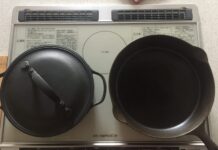 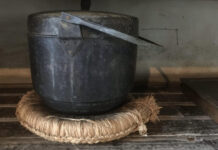 What Size Dutch Oven Is Best? (For Singles, Couples and Families) 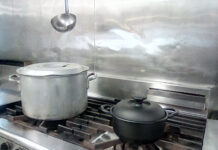 I trust the new year is going well for you. Somehow I think it’s going to be another eventful one.

Currently still in Japan. It has been a race to get my students up to speed and getting back to normalcy. Unfortunately, this has left little time to write new articles. But good things take time right?

Looks like we could be bunkering down over the next month or two. So I’m hoping to catch up and answer some reader questions over the next week or two.

Anyway, I hope you’ve had a little time over winter to make some hearty meals for you and your loved ones, using some cast-iron of course.