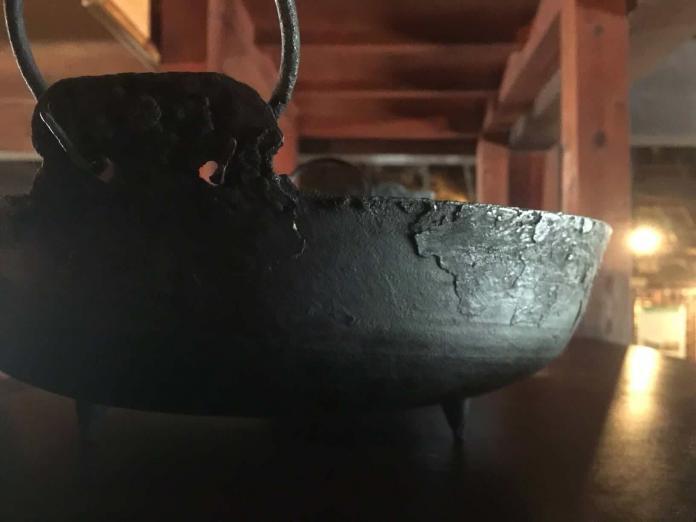 History of cookware, how has our cookware changed?

Evolution of cookware, some things we don’t give a second thought. Like how did our cookware evolve from stone and turtle’s shells to beautiful enamelware, cast iron and stainless steel?

I admit it I love traditional cookware materials especially enamelware, cast-iron and ceramics. They are not the most modern of cooking surfaces in-fact cast iron dates back thousands of years. Today many people prefer modern stainless steel and non-stick cookware. However, some of us still prefer cooking with the tried and tested materials.

I guess I’m more old-fashioned and think cast iron, enamelware and earthenware are not only functional but beautiful as well.

So how has our cookware changed throughout history? Let’s start at the beginning. When did humans first use fire to cook?

The first thing necessary our primitive ancestors had to discover was fire, so they could cook the game they hunted. So placing a morsel of raw flesh on a stick and searing it over a fire must have been exhilarating for primitive man. Moreover, fires provided warmth and light.

When did humans discover fire and use fire to cook food?

Evidence of humans using utilizing fire has been found at Israel’s, Qesem Cave dates back 300,000 to 400,000 years. In the cave, a hearth was discovered. This shows that there was most likely a fire continuously burning in the cave.

Why is a permanent fire pit important? It tells us the inhabitants most likely were not nomadic hunters and gatherers. However, a cave in South Africa suggests that ancestors of humans were using fire 2 million years ago.

So when did primitive humans first cook food?

Possibly 1.9 million years ago however this is debated. Unfortunately, fires don’t seem to leave much behind for archaeologists to sift through.

If calories were important why did primitive humans cook food?

Not only does meat taste better when cooked it also kills bacteria. Importantly meat would have been hard to come by. The hunting of game with very primitive tools would have been extremely dangerous and come with great risk. Humans knew cooking extended the storage life of food.

Secondly, cooking food breaks down protein and plant cells, making food easier to cut, chew and digest. Eating raw meat burns a lot of calories, therefore, cooking meat provided essential calories for survival. There are even theories, cooking food was instrumental in the development of the human brain and lead to the evolution of man.

Evolution and history of cookware, probably had a slow start as humans were busy hunting and gathering

Hunters and gathers used some tools to prepare food. Most likely they used stone tools for cutting and whole grains and nuts were ground between stones. Raw meat was probably cut thin so it could be digested easily and cooked quickly.

When did humans first boil water?

Humans started boiling liquids probably at a much later date than cooking meat. However, some think Neanderthals were able to boil liquids using birch bark.

How did early humans boil water? They probably used a method called stone boiling. What is stone boiling? Let’s find out

Evidence shows stones were used in fire pits and was most likely the way early humans boiled water. This method is called “Stone Boiling” a method in which stones are heated in a fire. Once the stones are hot they are transferred into a vessel containing liquid. The video demonstrates how early man may have boiled water.

Stone boiling was a huge discovery

Stone boiling which made water safe for humans to drink also the evolution of cookware continued to develop since humans needed containers to store their water. They would have used early pottery. These early bowls soon after placed on fires cooking food and used for boiling liquids. The evolution of cookware would have taken a giant leap was the use of “Earthenware” and the “Earthen-oven” to contain a fire. However, humans also used tortoise shells, bulky, stones with the center scraped out by hand and early pottery. Out of Asia they also used cut bamboo and sealed it with clay to protect it from fire.

Evolution of cookware changed the way we cook

Stone boiling was an early step for humans to use containers for cooking. Earthenware kept food ash-free and could be placed on a heat source. While earthen ovens contained fire reducing the amount of fuel needed each oven also has very good thermal mass to contain heat.

With these developments in cookware came new cooking methods such as:

Now able to boil, humans could cook high energy starchy food that required boiling such as:

So you want to try the Paleo diet? It’s not what you think

Although humans could boil water the diet was still mostly meat-based. Not the image we have of the Paleo diet of picking berries and eating nuts. During the Paleolithic Age fruit and vegetables would have looked very different and a fraction of the size of the fruit and vegetables today. It wasn’t until the Neolithic age which is characterized by humans widely adopting agriculture that we moved more to a plant-based diet. During the Neolithic Age, humans would have started to cultivate the soil and practiced seed section for bigger and tastier foods.

Earthenware pottery was the first step in the evolution of cookware

Earliest examples of pottery show it was first used in China and spread throughout the region before knowledge traveled West. Who knows when pottery was first used for cookware. However, archaeologists have unearthed ceremonial pottery dating back 25000-29000 BCE. The earliest known pottery vessels to date have been found in China and Japan. It is most likely that early pottery techniques move from the East to the West.

In the Neolithic Age, early cereals were cultivated

Beside and in the earliest pottery discovered in China, archaeologists found millet which is one of the earliest cereals humans grew. The grain was an important food source during the time. Earthenware cookware would have been used and millet added to soups used in Asia and Africa. Moreover, earthenware would be used to boil cereals in Europe. However Emmer wheat, Einkorn wheat and barley were cultivated for food.

If you’re interested http://www.visual-arts-cork.com/pottery.htm has a fascinating timeline on ancient pottery.

As time went on people discovered open firing, a process which clay is heated to a temperature between 600-900 degrees Celsius. A technological leap in firing leads to the development of the basic kiln which allows the pottery to be fired at a higher temperature. Higher temperatures would later lead to the discovery of ceramics and porcelain.

Today ceramic cookware is the first choice for oven based meals. Although ceramic cookware or earthen pots are not often used on direct heat sources such as stovetop cooking especially in the West. However, in Japan, the Donabe is the pot of choice for the popular winter dish Nabe.

Even with more modern advances in technology most ceramics cookware have two major drawbacks.

Copper was first fashioned into tools around 9000 BCE. It was thought to be perfected by the Mesopotamians around 4500 BCE. Copper was the first metal used by man on scale. Historians don’t know when exactly copper was first used as cookware but it has been well documented the Egyptians Greeks and Romans all used copper.

Large copper cauldrons were used in cookery for:

In towns too small for coppersmiths there was another profession that repaired copper cookware. They were called “tinkers” Tinkers were travelers and made their living by traveling from place to another repairing pots and pans.

Enter our beloved cast iron, which dates back to the 5th century BCE in China. Cast iron is a cheaper version of steel and was first used for pots and pans and farming equipment. In the 1st century, China developed the blast furnace. It wasn’t until the 15th century the first uses of cast iron were used in Europe.

Europeans and Americans first used cast iron for cauldrons. “Here” an interesting article on the benefits of cast iron if you want to know more. Although Europeans did not use cast iron until the 15th century. Before this cast iron was brittle and was only utilized when technology advanced and the casting process improved the quality and strength.

Instead, early Europeans used smelting techniques and iron hammered into bowls and cookware. Cast iron, on the other hand, was poured into a mold. However, cooking techniques remained similar in Europe and Asia. Food was cooked on a hearth over an open flame.

Since metal cookware was used on open flame certain features were added to help the user and prevent food burning.

What was the cookware of choice?

Although people did fry their food meat was a luxury until the advent of mass farming and refrigeration. Many families raised livestock and preserved meat and many urban households kept backyard chickens.

The industrial revolution would change the world forever. Rapid urbanization in England saw the rise of the population, rich, middle class and the poor. There were huge achievements in technology and scientist and inventors were the celebrities of the day.

While in the South Pacific, New Zealand, Australia and South Africa specialized in Agriculture supplying food to the increasing population of England.

How did cookware change?

People still cooked on fire however and used mostly Dutch ovens. However, as people become wealthier many changed how they cooked from an open fire to wood ranges invented by Benjamin Franklin. In 1826 an English inventor called James Sharp received a patent for the gas oven. In 1892 the Electric range was invented by Thomas Ahearn.

Soon Long handles on cookware were replaced with short ones. Hanging Rings were no longer needed. New handles on Dutch oven were designed to make it easier to be carried in and out of the oven. Also with readily supply of meat diets slowly changed and frying became more popular. By the 20th century, skillets replaced the Dutch Oven as to go-to pan in the kitchen.

Of course, humans have experimented over the years with different materials such as:

I grew up in a house using aluminum and later Teflon. In hindsight, both materials may not have provided safe cooking surfaces but we weren’t to know at the time. We certainly have progressed in the development of cooking utensils. However, ceramic dishes and cast iron remain extremely popular choices because of their durability. Stainless steel is a great option, it’s now the go-to cookware in commercial and many households. However, higher quality equipment can command a higher price.

Evolution of cookware, from basic tools to modern utensils

Over the last couple of centuries, the introduction of a variety of metals like iron, copper and aluminum have entered the marketplace.  Stainless steel is now a favorite cookware material for many due to its shiny luster is also non-reactive to acidic foods.

Each metal or ceramic product has its advantages and disadvantages. Some pans heat up quicker than others, some distribute the heat more evenly. Whatever your need, there is cookware for everyone we can thank our ancestors for this.

We prefer the traditional ways of cooking our grandparents cooked, that’s in cast iron and ceramics. However, there are so many different choices. For us, the most important factor is the enjoyment you have from cooking. 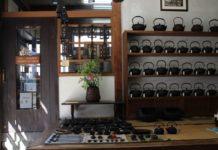 How to use and care for cast iron teapots, (tips, benefits, restoration).

Lodge Manufacturing: Why is their cast-iron loved around the world?