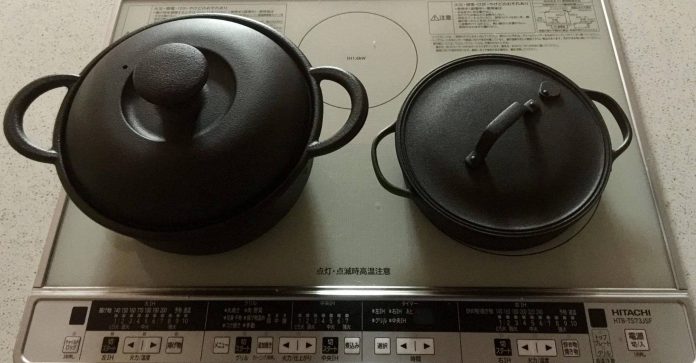 In this article, we have a showdown between two heavy-weight pots. We will compare the useability and practicality of the braiser and Dutch oven. Both look similar in design and have a comparable price point. But which is the better pot for your needs. Braiser versus Dutch oven, is there a clear winner?

This article will answer the following questions:

What are the differences between cast iron brasiers and Dutch Ovens?

When you look at both pots, it’s hard to see how they are different. Is one just shallower than the other? And the quick answer is yes, a braiser has lower sidewalls compared to a Dutch Oven.

It’s a subtle difference, but still, you’re likely to favor one pot over the other for different cooking methods. In the same way, you’ll use a stockpot for bulk cooking and a Dutch oven for slow cooking.

Table: below is the preferred cooking method for brasiers and Dutch ovens.

Why use a braiser?

As seen in the table above, you can braise in a Dutch Oven. So why would you invest in a brasier if you already have a Dutch oven?

In many ways, I wouldn’t, and a Dutch Oven is often better suited for braising. You can braise big pieces of meat because of the high walls. Dutch ovens have a heavy lid that reduces evaporation. And this is all you need in a braising pan.

For example: In Victorian times, you were likely to keep and cook your backyard chickens. Today we are more likely to buy a pack of drumsticks at the grocery store.

And this why you might choose to cook in a brasier instead of a Dutch oven. Braisers are often lighter, and or have a wider cooking surface compared to a Dutch Oven. A braiser is also a great choice if you do a lot for stovetop cooking.

And if you’re wondering which size braiser you should buy. Here’s an informative article, for the ideal size based on the number of people in your household.

Let’s compare the measurements and weight between a Dutch Oven and a braiser of the same brand.

Why use a Dutch Oven?

A brasier is aptly suited for modern cooking styles, but there are clear advantages to use a Dutch Oven instead of a brasier. After all, both brasiers and Dutch ovens have a similar price point. So are you getting more pot for the money?

Not only can you braise big pieces of meat in a Dutch oven compared to a braiser. But the traditional cast iron vessels is also great for the following cooking methods:

Can you use a Dutch Oven instead of a brasier?

Most definitely yes, although braisers and Dutch ovens employ different cooking methods. They both have a heavy lid and thermal density, making each pot ideal for braising.

Braiser versus Dutch oven, which pot should you get?

You can use either a Dutch oven or a modern braiser, and they will both serve you well. Both are aptly suited to braise, and either one will do the job perfectly.

But if I only had to choose one, it would be the braiser. It’s great for stovetop use, and the lighter weight makes it more user-friendly. Using the braiser without the lid is especially beneficial to those new to cast-iron cooking. As the heft of a large Dutch oven can be overwhelming for many. To learn more about the pros and cons of braisers, here’s an in-house article you might find interesting.

The benefit of choosing a Dutch Oven instead of a braiser is the depth and capacity of the pot. Dutch ovens are better than braisers when stewing, making soup, or for dishes that require a lot of liquid.

From my experience I use my Dutch Ovens for some meals and a braiser for others. The table below is my preference for cooking certain foods. It may help you when deciding between the two pots.

Final thoughts. Get a braiser for your first piece of cast iron. And a Dutch oven for stewing and soups

Choosing a Dutch Oven is a safe option and a good one. You can cook pretty much anything in it, and they last a long time. But it is important not to get overly excited and purchase a pot too large for your needs. And this is the reason I would choose a braiser. Sadly, many choose an oven too large and heavy, and they rarely end up using it.

Here’s my recommendations for the Dutch Ovens sizes based on the number of people in household.

The sidewalls on a braiser are shallower, reducing the weight of the cooking pot. But at the same time making the vessel more practical for stovetop cooking. And is your is the perfect all-rounder.

However, you could be thinking, if you should simply get a skillet? In this article I compare the trusty skillet with the cast iron braiser. Just click the link learn more. Otherwise, have you decided the best pot for your kitchen requirements, is it a Dutch Oven or the braiser?

Should I buy a Griswold Skillet? Essential Advice Before Purchasing.