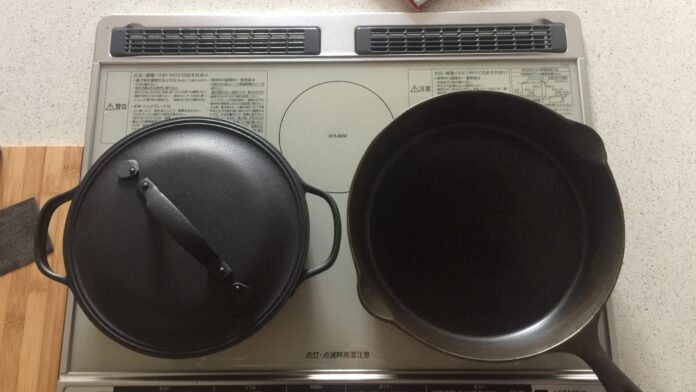 Where do you fall in the debate of a braiser versus cast iron skillet? It’s a debate that many first-time cast iron users ask themselves before buying their first piece of iron cookware. Should I buy a cast-iron skillet or one of those great-looking braisers?

In this article, I’ll explain the similarities and differences between the two vessels, so you can decide the pan that is right for you.

Getting to Know the Braiser

Most people are first introduced to braisers without actually knowing it. A braiser has a strong resemblance to a Dutch oven with shallower walls. This causes many people to think they are looking at a type of Dutch oven, when it’s actually a braiser.

It’s an easy mistake to make. A braiser is made from the same materials as a Dutch oven. However, the proportions are considerably different.

The shape of a cast iron braiser vs. skillet

If you’ve ever cooked with a Dutch oven. Then imagine that general form of a Dutch Oven with much shallower sides. The shape of a braiser is intended to cook cuts of meat semi-submerged in liquid. This gives optimum tenderness and flavor to your dishes.

Needless to say, a skillet also has shallow sides. Shallower sides are ideal to quickly see, turn or flip your food with a spatula or tongs. So skillets are designed for quick no-fuss cooking.

Slow cook in a braiser for natural flavor

The shape of a braiser allows chunks of meat to cook in its own juices for maximum flavor.

In a braiser, you’ll find that your meat stays nice and tender while also cooking very uniformly without any hot spots. The pot is ideal for browning meat. But without the excessive heat and speed of a cast-iron skillet, which can dry out food.

Because a brasier has higher sides than a skillet, you can add more liquid to the pot without the risk of spills. This allows your food to be slowly cooked in its natural juices. And creates natural tasting flavorful dishes.

If you want to learn about the best size braiser for you needs, Here’s an in-house article you might find useful.

Choose a skillet if you want to cook meals quickly

A skillet is a nonosense pan. It is an ideal pan to fry meats, turning vegetables, and flips those yummy Sunday morning pancakes. A skillet is an allrounder in the kitchen.

And when you finish work and want to quickly make a meal, reach for a skillet.

A braiser allows you to cook on the stove and oven, and it’s really design for this dual purpose. You can mix up your cooking style by getting that nice sear on your meat before finishing the cooking process in the oven.

Braisers have the same stovetop-to-oven ability that makes Dutch Ovens so versatile. But when you’re doing traditional braising, you leave your meat partially dry, meaning above the liquid in the pot. This creates steam to tenderize and brown meat, to enhance flavors.

Cooking with a braiser instead of a skillet

Can you just substitute a cast iron skillet if you don’t have a braiser?

Yes, a braiser is made of cast iron and has the same thermal capabilities as a skillet. A braiser can fry, sauté and cook food on the stovetop just as well as a skillet.

However, the higher sides in the braiser make it more difficult to turn and flip food. If you are cooking meals and you use a spatula, then a skillet is the better choice.

While it may be tempting to think that searing on a braiser is the same as searing on a skillet because they’re both cast iron, this isn’t a full-apples-to-apples comparison. Like modern Dutch Ovens, braisers typically have an enameled coating.

Enameled cast-iron tends to hold into food more than a traditional cast-iron pan. This is a kind of way to say food is more prone to sticking.

Click if you want to know more about the benefits and disadvantages of seasoned and enameled cast-iron.

Handles on a braiser

Braisers are easy to pick up with both two hands because it has two handles. This makes a braiser better to move from the kitchen to the dining table. And importantly, safer to grip when putting the pot in and out of the oven.

A skillet has a single long handle making it better to maneuver in one hand. So you can use a kitchen utensil in the other.

Typically the handle will also have a convenient hole. So you can hang your skillet for easy reach instead of storing it in the cupboard.

As mentioned previously, a braiser has higher sides compared to a regular cast-iron skillet. While not as high as a Dutch Oven, cooking in a braiser allows you to use more liquid with a lower risk of spills and boilovers.

Higher sides allow you to make a wider variety of meals such as soups and casseroles in your brasier. Because of the increased capacity, the pot is worth serious consideration if you want a multipurpose family pot.

When it comes to pouring sauce, or liquid the cast-iron skillet excels. This is due to pouring spouts on a skillet. The pour spouts on skillets come in handy when you’re tipping the pan to expel juices, sauce, or grease.

Draining a braiser is notoriously and defiantly difficult due to the short handles, rounded shape, and lack of spouts.

So you might want to think twice before purchasing a braiser instead of a skillet if you often fry or cook using sauces.

Here’s some more reasons to cook with a cast iron skillet.

Comparing the Braiser with a Cast Iron Skillet

A braiser is ideal for:

A cast-iron skillet is ideal for:

Is a Braiser or Cast Iron Skillet Better?

While a braiser is often described as being what you’d get if a Dutch oven married a cast iron skillet, it’s not necessarily a replacement for both. But you could get away with using just a braiser.

This is why there is the braiser versus skillet debate because you could use either one.

Many cooks use Dutch ovens, braisers, and skillets for specific cooking tasks. Yes, there is overlap. However, you need to decide if “close enough” means “good enough.” And choosing between a skillet and a braiser is entirely up to you, if you want to learn more about the differences between Dutch Ovens and braisers just click the link for an in-house article. And here’s another to learn more about cast iron braisers.

If you were choosing between a cast iron skillet and a braiser, I would always choose the skillet. A skillet is a pan for daily use, and you can use it for so many of your favorite dishes. You can also pick up a great skillet at a very affordable price.

If you want to see my skillet recommendations for new cast iron users. I have a well-researched article for new and experienced cooks. Just click the link if you want to learn more.

The obvious limitation is that a cast iron skillet comes without a cover to retain moisture the way that a braiser does.

One way to fix this without added cost is to add some foil to the top of your skillet to create a seal. This is not ideal, but it’s a cheap and easy hack to cook tasty meals without buying another pot. But if you already have a skillet and want to use a braiser, they are so much fun to use. And the pans sure look good too.