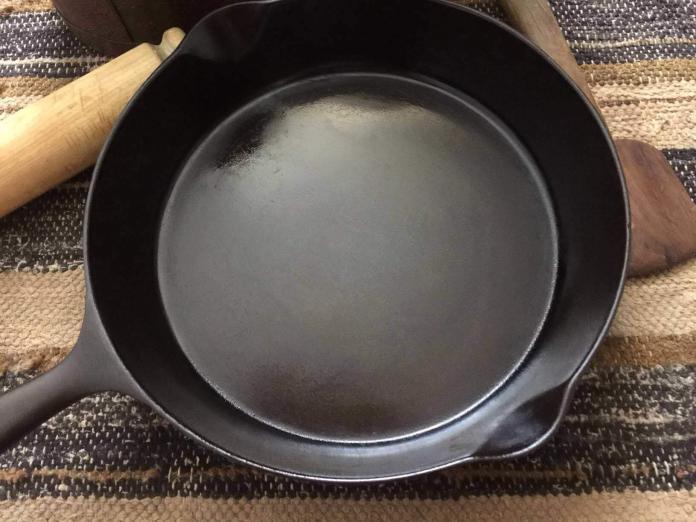 Sidney Hollowware Company has to be one of my favorite companies that made cast iron cookware. The cast iron tends to have very few molding imperfections and is smooth on both the interior and the exterior. Unfortunately, the company is not as well known as Griswold or Wagner Ware and only manufactured cast iron for a short period.

In this article, you can learn to identify cast-iron made by the Sidney Hollow Ware Co. But first, here is some information about the former company. See the table below.

Looking for a light pan? Then it is hard to look past Sidney Hollowware.

It must have been standard practice to cast iron thinner back then. Sidney skillets are great if you are looking for a lighter pan but without the price of an early Wagner cast iron skillet or Griswold skillet. However, larger skillets in good condition are highly collectible and can command some healthy prices.

I have also seen a notable increase in the asking price with some online sellers. So if you are looking for Sidney Hollow Ware cast iron, I urge a little caution to select a good piece from a fair seller.

Did you have any Sidney Hollowware cast iron?

Sidney Hollow Ware Co. had their foundry based in Sidney, Ohio. And only made cast iron cookware between 1886-1897. I reckon you are lucky if you have old an old Sidney Hollowware skillet in your possession. There are not too many of these pieces around.

They are more scarce than Wagner and Griswold cast iron and rarely come up on online auction sites, so keep an eye out for them. I also have an interesting article if you want to learn more about the history of the Sidney Hollow Ware Company. Just double-click the banner below.

Despite the short history of the company, it seems the company had several logo variations.
However, all of the logos have an old-world charm from a bygone era. They really look great. If you are looking for a vintage pan, these old-timers are really good-looking.

As with any antique, dates are estimations from research that should be considered as a guide. And not as an indication as concrete dates of manufacture. Although, I have tried to make the dates as accurate as possible.

The script logo is considered the oldest of the logo design. The logo is quite beautiful and also simple. It is embossed with the word Sidney followed by 0 for Ohio, and the lettering is in a cursive writing style.

The second logo is called the block logo, and it has the company name in block lettering. The logos are either straight or in an arc shape. But both logos have Sidney and the letter 0 placed in the center. This logo has an “Old West” look to it.

The picture below was donated by a very kind reader from New Hampshire. The skillet is another example of the Sidney Hollow Ware Co logo with block lettering. Interestingly the #7 looks very similar to the #7 seen on some Erie skillets.

You will also notice sulfur pitting in both examples above and below. Sulfur pitting is not uncommon on Sidney skillets. Most likely, this is due to the time of manufacture. After all, the company was manufacturing in the late 19th century when wood and coal stoves were commonly used.

There is another Sidney cast-iron logo. And is often confused with Sidney Hollowware. This logo is considered to be made under the ownership of Wagner Ware which bought out Sidney Hollowware Company in 1897.

If you are looking for a real Sidney Hollowware ironware, then look for the script logo. But those Wagner skillets that were made in the Sidney foundry are extremely well-made too.

Pre Wagner and made by Wagner.

Sidney cast iron may be described as Pre Wagner or Made by Wagner. This is really referring to the different logos mentioned above. This is to correctly identify Sidney Hollowware cast-iron from Wagner produced cast iron in the Sidney foundry.

If you want to buy a piece of Sidney cast iron, please check the logo carefully before deciding to purchase. Understandably those selling one or two pieces of cast iron may label it inaccurately.

While people value Wagner cast iron and Griswold cast iron more highly for their collectibility. Sidney Hollowware is still very collectible and pieces are harder to come by. They made some great iron which you can be proud of.

The logos also have that old-world wow factor that looks wonderful. I really enjoy my Sidney skillets.

You might want to consider Sidney Hollowware only manufactured cookware from 1886-1897. So while Griswold and Wagner maybe are more well known as quality vintage iron. There is also a lot more it around. Sidney Hollowware, on the other hand, is more scarce. And less information is documented on the company.

Sidney Hollow Ware seemed to cast their iron very well. With very smooth cooking surfaces and exteriors. The iron made is lighter than modern cast-iron cookware.

What to consider before purchasing Sidney cast iron?

I have tried my best to research and to give accurate information. The guide is to the best of my knowledge. However, as an owner of a small collection of cast iron, I can say that Sidney Hollowware is incredible. Many of these pieces are still usable today as they were all those years ago.

If you come across a piece for sale, it may pay to take a second look. And if you are thinking about selling a family heirloom. I’d think about keeping it in the family. After all, you don’t come across these old pieces every day. 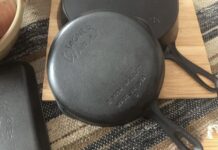 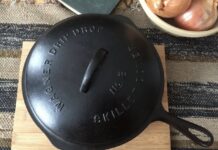 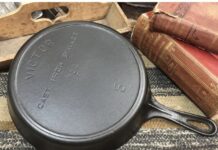 Braiser versus Dutch Oven, which pot is the better choice?

Why use a cast iron skillet? Here are some lesser-known reasons.

Can you wash cast iron with a Japanese tawashi brush?